On Thursday, June 8, the Philadelphia Eagles celebrated their 88th birthday.

Initially established in 1933, the team has seen eight owners and 24 head coaches. As a team, the Eagles have appeared in 27 playoff games and won 14 division titles (11 in the NFC East), nine of them being within the last 20 years. More importantly, the team also played in three Super Bowls, winning one in 2017 against the New England Patriots.

Newest head coach, Nick Sirianni, is now preparing to make his Eagles debut in less than one month with the hopes of improving upon his predecessors.

THE MAKING OF THE PHILADELPHIA EAGLES

Before becoming an Eagles franchise, the Frankford Athletic Association was created in 1899. The team became one of the best independent football teams across the country and was granted an NFL franchise in the early 1920s. Renamed the Frankford Yellow Jackets, they became bankrupt less than a decade later.

The NFL then awarded Bert Bell and Lud Wray the failed Yellow Jackets organization. Wray became the first owner of the Philadelphia Eagles, named after the Blue Eagle emblem of the National Recovery Administration.

The Eagles first their first official game on October 15, 1933, against the New York Giants. They lost the game 56-0 and continued to struggle throughout the next decade. Because of the failure, the team suffered financially and was sold to the sole bidder, Bert Bell.

In 1940, the Eagles and Pittsburgh Steelers essentially exchanged rosters. Bell became the Steelers head coach, and Earle Neale was hired to lead the Eagles. However, after World War II, both rosters were challenging to fill, resulting in a merge. The Steagles played for one season before dividing.

After the reformation of the Philadelphia Eagles, Neale led the team to success, and The Birds won their first NFL Championship game in 1948.

The Eagles saw several changes to the coaching position until Buck Shaw joined the team in 1958. Two short years later, Philadelphia played against Vince Lombardi’s Green Bay Packers in the NFL title game. The Eagles won, handing Lombardi his only championship game loss in his career. 1960 is now one of the most historic years celebrated in the Eagles’ franchise.

THE ROAD TO THE EAGLES’ FIRST SUPER BOWL In 1970, the NFL and AFL merged, ultimately placing the Eagles in the NFC East. While Philadelphia’s rivalry against the New York Giants is the oldest, their contention against the Dallas Cowboys has become one of the largest in the entire league.

Though fans may be disappointed in present-day given the Eagles’ 2020 season, 1972 was the worst season in Philadelphia’s history. The team finished 2-11-1.

The Eagles began to turn things around under head coach Dick Vermeil, making the playoffs in 1978 — the first time since 1960. Two years later, they beat the Dallas Cowboys in the NFC Championship, earning their first trip to the Super Bowl. The Eagles played the Oakland Raiders, losing 27-10.

NO ONE LIKES US; WE DON’T CARE

The era of Buddy Ryan in 1986 provided Philadelphia with the spark fans needed. His contagious attitude toughened the Eagles up, and the team became known for their robust defense. After releasing aged players, the Eagles showed progress, reaching the playoffs in 1988.

In 1994, Jeffrey Lurie purchased the Eagles for $185 million. Today, the team is regarded as the 30th most valuable team in the world. During Lurie’s reign, Philadelphia was led by Ray Rhodes. The team experienced one of their worst seasons to date, finishing 3-13. Rhodes was fired; however, the Eagles welcomed Andy Reid for the next 14 seasons — the longest leading head coach in Eagles’ history.

Philadelphia went on to win the NFC East six times, divisional playoffs four times, and the NFC Championship once. They played in Super Bowl XXXIX, losing to the New England Patriots.

Pederson began his career with the Eagles alongside rookie quarterback Carson Wentz in 2016. Though the team finished last in the division that season, Philadelphia made an epic comeback in 2017. Finishing 13-3, the Eagles made their third Super Bowl appearance. With the help of Nick Foles and “The Philly Special,” Philadelphia won their first franchise Lombardi Trophy against the Patriots, 41-33. 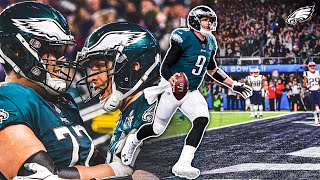 With their first Super Bowl win under their belt, Philadelphia made the playoffs in 2018, taking the NFC East in 2019.

In an odd turn of events, the 2020 season became one of the worst in franchise history. The team perished to ongoing injuries and a record number of offensive line-ups. Controversy unfolded as Pederson benched Carson Wentz for rookie quarterback Jalen Hurts, The team finished 4-11-1, missing the playoffs for the first time in four seasons.

Entering the 2021 offseason, the Eagles wanted to focus on rebuilding, including a new coaching staff led by Nick Sirianni. With several new [younger] players, many positions remain undecided as Sirianni wanted to bring competition to the forefront of the team.

Though no one knows what this coming season will bring, the Eagles are predicted to have the easiest schedule in the league.