The Eagles have announced the signing of wide receiver Keric Wheatfall, a rookie out of Fresno State that participated in rookie minicamps on a tryout basis. 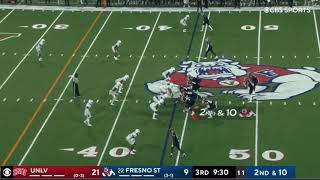 Wheatfall — one of 19 players invited to try out — clearly impressed the Eagles during minicamp, though it’s just the first of many grueling steps towards becoming a building block in the team’s future plans. Let’s take a look at where he shines (and falls short).

Wheatfall’s Hands, Catches, And Development Could Make Him An Interesting Prospect

According to Pro Football Network, Wheatfall uses the sidelines well, makes tough over-the-shoulder cases, and frequently shows off his strong hands. Negatives include only playing to one speed, a limited route tree, and his marginal college production. Still, Wheatfall has some potential that could be worth a dart throw.

“Though never super productive, Wheatfall displayed consistent progress in his game and comes with an upside. He’s worth keeping on a practice squad this fall with the possibility of future development.”

Unfortunately for Wheatfall, it might be tough to crack the final roster. With Smith, Brown, Watkins, Pascal, and Ward being likely locks, there could be just one or two spots for the six other receivers. If he doesn’t make it, Wheatfall could still be a prime practice squad candidate thanks to his upside.