It seems as if the Eagles’ M.O. is to cause Philadelphia fans panic before putting worries to rest. Sunday’s game against the Giants began the same way.

If you watched the first quarter, you were probably just as confused as everyone else. The Eagles couldn’t seem to keep the ball in their hands, and the team went scoreless going into the latter end of the first half.  The Giants gained the lead with a field goal, and after Jake Elliott missed his first score all season, the kicker redeemed himself on Philadelphia’s next drive.

From there, the Eagles scored 34 consecutive points. Philadelphia is now 8-7 as they look to stay in playoff contention, and they couldn’t have done it without Sunday’s five standouts.

5 STANDOUTS IN EAGLES WIN OVER GIANTS

Smith continues to prove game after game why he was a first-round draft pick. The wide receiver logged five catches for 80 yards and one touchdown during Sunday’s game. The touchdown came in the third quarter after Hurts threw a pass down the right side of the field. Smith kept both feet in; however, after the touchdown was ruled complete, the refs ruled it incomplete, then complete again.

Following the game, Sirianni stated Smith practices toe-drags — and thank goodness for that

“The Giants Killer” did it again. Scott put the first Eagles’ touchdown on the board, sparking motivation for the remainder of the game.

Philadelphia fans haven’t seen Scott in quite some time after falling down the depth chart. However, with Sanders and Howard both out, Scott completed 12 carries for 41 yards.

The Eagles’ defense on Sunday was strong.

Defensive end Josh Sweat was the highest-graded player after Sunday with 92.4. He had four total tackles, one forced fumble, and one sack.

Last month, the Eagles signed Edwards to a one-year contract extension after Sirianni made it clear he wanted to invest his time in the linebacker.

During Sunday’s game, Edwards had 16 total tackles, one tackle for a loss, and one pass defended. Pro Football Focus graded him a 90.7 after playing the Giants.

Lane Johnson is a Philadelphia legend. On Sunday, he surrendered zero pressures one 31 pass-blocking snaps. Pro Football Focus ranked him the highest-graded offensive player for the Eagles with an 83.5.

The offensive tackle also secured his first touchdown during the second half. He became the first Eagles’ OL to make a touchdown since Todd Herremans in 2010 while playing the Dallas Cowboys. 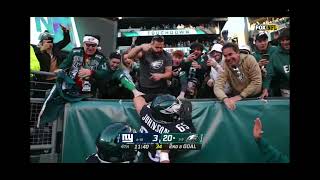 FINISHING OUT THE SEASON

Following Philadelphia’s win against the Giants, they have taken over the seventh and final playoff spot — for now.

The Eagles will have to win their last two games against Washington and Dallas if they want to see the field in the post-season.

Philadelphia heads to Maryland on Sunday, January 2, for their final away game. Kickoff is at 1 PM.