Home-field advantage often accounts for three points in the spread.

But when the Eagles invade Met Life Stadium for the next two weeks, playing the New York Giants Sunday and the Jets the following week, bettors might view Philadelphia as the home team.

New Jersey and Pennsylvania sports bettors will be tempted to look at the betting line of the Eagles favored by close to a field goal as a gift.  Philadelphia doesn’t play like a road team here.  Met Life Stadium is the team’s most successful venue away from the Linc.

Seeking an edge, a bettor could determine that three points baked into the line for home field won’t apply to the Eagles. And that perhaps they are better than -3.5.

It will be interesting to watch the betting patterns.

If the Eagles add a Met Life two-bagger to their season, they could become 7-6 before the home stretch.

But here’s a tantalizing DraftKings Same Game Parlay that can be tossed into the mix.

The tradeoff? Gamblers are asking the Eagles merely to win the game, regardless of the spread. The tweak in the total reflects the fact that the Giants have been involved in low-scoring games here and that both teams recently have been posting in the low 40’s.  (The Giants prevailed here last year 27-17 after the Eagles triumphed 22-21 at the Linc).

The same philosophy holds true for taking the “under” in the second half of the same-game parlay. You can move the line up by a touchdown and take the under.

The kicker, naturally, is that the bettor must convert both picks to have a winning ticket. But this is where the anchor philosophy comes into play.

Moving the line and the total removes the Eagles’ responsibility to cover the spread. If they win by two and the point total is right, you still have a winning ticket.

The beauty about working with this on the app is the instant revelation of the odds before a selection is made. Before mobile apps entered the picture, gamblers would be hesitant to play around with parlay odds while on the betting lines. That would irritate other customers clamoring to make their wager.

Naturally, the excitement of this resurgence has found its way to WhyEaglesWhy, the weekly YouTube channel devoted to all things Eagles.

It is hosted by Pete Amato, Bill Gelman and myself. 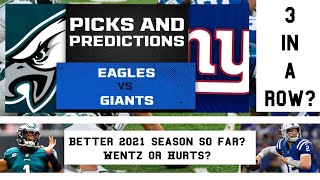 There’s a clear choice. Maneuver the line and take a smaller profit for a higher win probability or go all-in with your convictions.

How do you want to play this?

Here’s one anchoring strategy for anyone who believes the Eagles are going to win the game.

Eagles backers have many options, including the point spread at -110.

Met Life Magic for the Eagles

What kind of life will Met Life Stadium bring the Eagles?

A pivotal two-game swing works in their favor, highlighting the new schedule in the NFL’s move from 16 to 17 games for each team.

The Eagles will be favored in both games and feel comfortable in North Jersey. They even worked out with the Jets in Florham Park, the Jets’ training facility, during the pre-season.

How cozy is Met Life Stadium for them?

It was here that DeSean Jackson authored the electric Miracle of the New Meadowlands finale, returning a punt for a touchdown on the final play. It capped a 28-point outburst in the final seven minutes, giving the Eagles a 38-31 victory in 2010.

It was here that the Eagles defeated the Giants in 2019, taking the overall series lead for the first time ever. They lead this matchup, which dates back to 1933, 89-87-2.

Although the Giants won the last matchup 27-17 in 2020, the Eagles have something to play for, besides pride.

“They found their strength” Bill says. “They re-thought who they had on the team. The strength of this team is the offensive line. It has opened up a running game that is tearing up a storm in the last few weeks. How many times on this show did we say ‘run the ball, run the ball’. Now they can’t stop running the ball.”

To his point, the Eagles ran the ball a whopping 50 times in last week’s 40-29 triumph over the New Orleans Saints. Quarterback Jalen Hurts rushed for three touchdowns.

Pete described a progression that has brought the fans back into the concept of meaningful, late-season football.

Suddenly, the Eagles have scored 138 points in the last four games.

“People are buying into the progress this team has made for the first time this season,” Pete says. “They are seeing that the Eagles are getting better and better.

“That’s big because it shows you they are doing something right, that they have a plan. The future of this team looks exciting now.

The next WhyEaglesWhy episode also projects the Birds’ win total for the next six games. It charts the games of the week, the NFC East and the heavy accent of division games down the stretch.

There are predictions for NFL Week 12, Gelman’s Gold and more.

Look for it and good luck with your wagers!