Eagles pull off a win against Washington after a shaky start

The Philadelphia Eagles pulled off their second home win against the Washington Football Team last night. Now 7-7 and fighting to stay in playoff contention, the matchup didn’t come without tribulations.

Originally supposed to be played on Sunday, the NFL postponed the game to Tuesday due to Covid. The Eagles were forced to play their first of three games within 13 days to no fault of their own. Despite a shaky start giving the Football Team the upper hand, Philadelphia emerged victorious, 27-17.

A TRAILING FIRST HALF

The first quarter of Tuesday night’s game was a nightmare for the Eagles. A pass intended for Dallas Goedert was dropped, bouncing off the tight end’s foot, and was intercepted. Washington took advantage, scoring a touchdown and an early lead. 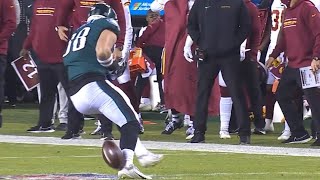 On the Eagles next drive, Hurts was sacked at the 23-yard line. The ball came loose and was fumbled, leading to a 10-point deficit for Philadelphia. 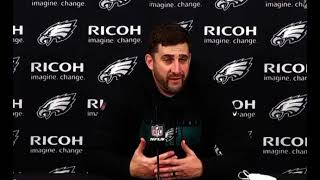 After the game, Sirianni stated, “He [Hurts] likes tough coaching, and I wasn’t going to back down on him. I thought he was careless with the football, and I let him know that, and we are just honest with each other. Sometimes it comes off as we’re just talking through it, and sometimes, I’ve got to deliver the message a little bit different.”

The message must have been delivered. Hurts and the Eagles turned the game around in the second quarter of the game.

Philadelphia returned to their strong run game, putting three points up as Jake Elliott made his 16thconsecutive field goal this season.

Goedert made a 21-yard catch as Sanders completed the following three carries, taking the half down to the two-minute warning. Hurts rushed to the goal line, coming up 1-yard short, but finished with a touchdown on the next play to tie the game.

Closing out the half, offensive tackle Jordan Mailata was called for his second penalty, cornerback Darius Slay played offense, and Fletcher Cox completed his second sack of the year.

ONE STEP CLOSER TO THE PLAYOFFS

The Eagles came back with a vengeance after halftime. Hurts completed another touchdown to take the lead for the first time all game on their first drive. The score was the quarterback’s 10th rushing touchdown — the most by any Eagles quarterback in a season.

With the offense taking the lead, Philadelphia’s defense followed, shutting out Washington in the third quarter.

As both teams struggled to hang on to the ball due to rain, Elliott completed another field goal, making it a 10-point game. On the kick, a penalty was called on Washington, and fans could see Hurts on the sidelines saying “Go for it” to Sirianni. The head coach declined the penalty as the Eagles kept the points.

In the fourth quarter, Washington came back with a strong drive, scoring another touchdown. However, Eagles’ Greg Ward delivered with a 34-yard touchdown — his first since the first week of October.

The Eagles won the game 27-17, advancing to 7-7. Hurts completed 20 of 26 passes for 296 yards and three touchdowns. With 38 rushing yards of his own, the Eagles finished with 238 rushing yards. They became the first team with 175+ yards in seven consecutive games since the 1985 Chicago Bears.

“He [Hurts] played a great football game — one of the best I’ve seen him play,” Sirianni said. “Jalen is able to take tough coaching. He responded great and played a great game.”

Philadelphia doesn’t get much of a break. On Sunday, December 26, they return to Lincoln Financial Field to play the New York Giants at 1 PM.