The trio talked for about an hour about the Week 18 match-up, insisting the team should not play starters too long for a game that mattered little to postseason seeding. The Eagles decided to list quarterback Jalen Hurts and other stars inactive before kickoff in a game the Dallas Cowboys would win 51-26.

Akers and Jaworski led giveaways of rally towels offered by the casino to fans. Following the broadcast, Jaworski went out to the casino floor and gave out $100 bills to patrons at the slots, table games, and the FanDuel branded sportsbook. The giveaway is a regular occurrence of Jaworski’s appearances at the venue, and apparently had nothing to do with the sportsbooks giving away large sums to new players in New York state on the Saturday launch.

During the event, we were able to sit down with Akers and Jaworski for an “on-location” segment of Why Eagles Why, our weekly discussion of Eagles’ topics. While the site has yet to publish the franchise’s top-10 specialists article, a source close to the discussion believes Akers will be #1 on the list. 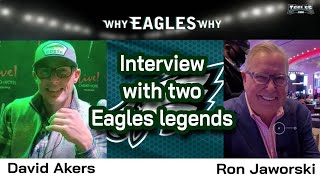 Pete Amato is the creator and content manager of Iggles.com. Pete is a huge Philadelphia sports fanatic with 10+ years of experience writing, producing, and managing creative content throughout all mediums. He has had the opportunity to implement creative strategies for a variety of sports media, sports betting, and online gaming platforms, as well as all throughout the online casino industry.

View all posts by Pete Amato